Chris Skidmore was born in Longwell Green and now lives in Willsbridge with his wife Lydia and baby daughter Clementine. His family have lived in Kingswood for generations. Before being elected as the MP for Kingswood in 2010 and again in 2015, Chris worked as a historian and had briefly taught history at Bristol University.

Theresa May recently appointed Chris as Minister for the Cabinet Office and as Kingswood’s MP he has stood up tirelessly for Kingswood's local area in the House of Commons, delivering new GP surgeries in Kingswood and Emersons Green, calling for the protection of the Kingswood Greenbelt, cracking down on foreign nationals using the NHS, as well as successfully changing laws surrounding dangerous driving, for which Chris was given an award by road charity Brake.

Locally Chris has held 11 MP Jobs Fairs to help people find work, while as a result of his campaigns for new schools in Kingswood, he has managed to secure two new primary schools and a new Studio School.

In his little spare time, Chris is enjoying fatherhood and walking the family spaniel. 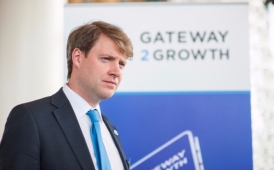