Tennis court upgrades are ‘game, set and match’ for Frenchay and Downend 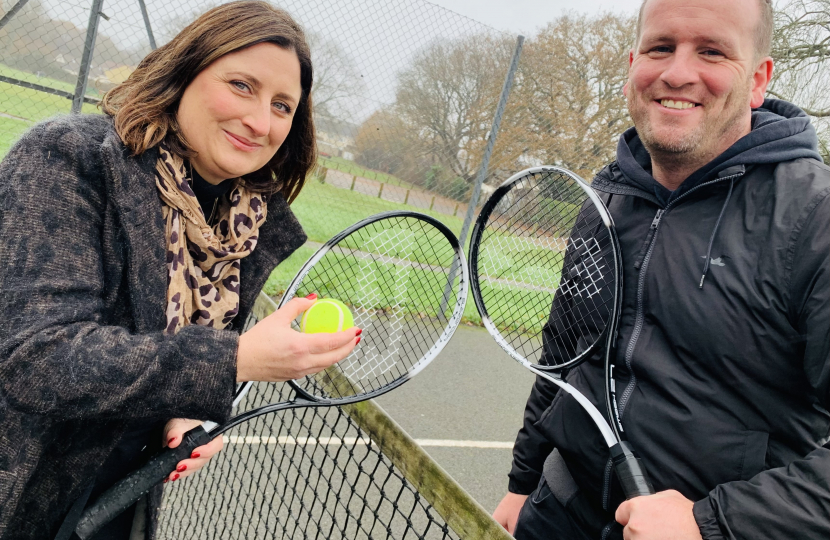 Conservative councillors have been making a racquet about better tennis facilities coming to Frenchay and Downend.

The Lawn Tennis Association (LTA) has pledged £46,500 for upgrades to the court at Bromley Heath Playing Field. The money will see the court resurfaced and improvements made to the gates and fencing.

“It’s vital that residents are given opportunities to keep fit and healthy, and as the Conservative ward councillors we will continue to do all we can to bring investment such as this to the local area.”

Cllr Ben Burton, Conservative ward member for Frenchay and Downend, and Cabinet Member for Corporate Resources, said: “These improvements will make a real positive difference for residents, and I would like to thank the LTA for selecting the Bromley Heath court for this package of upgrades.

“Having good sports facilities is so important for improving people’s health and wellbeing, and a better tennis court at Bromley Heath will hopefully encourage more people to keep active.”

The councillors see the investment from the LTA as part of a package of wider improvements to public amenities in Frenchay and Downend. They are supporting plans by the Downend and Bromley Heath Parish Council to build a new pavilion at King George V Park.

Cllr James Griffiths, Conservative ward member for Frenchay and Downend, and member of the Downend and Bromley Heath Parish Council, said: “We are delighted to be supporting better access to sports and leisure facilities right across the ward.

“It’s our job as local councillors to champion schemes that will help people live happy and healthy lives, and that is exactly what we’re doing.”

The Bromley Heath courts are among several tennis courts in South Glos that will receive a makeover from the LTA. Other improvements will be made to courts at Kingswood Park, Page Park and at Frampton Cotterell.

Delighted the Health Secretary joined me in thanking the South Western Ambulance Service call handlers in reducing the average call answering times by 95% to just three seconds and the public for halving the number of 999 calls to the Trust over the last month.