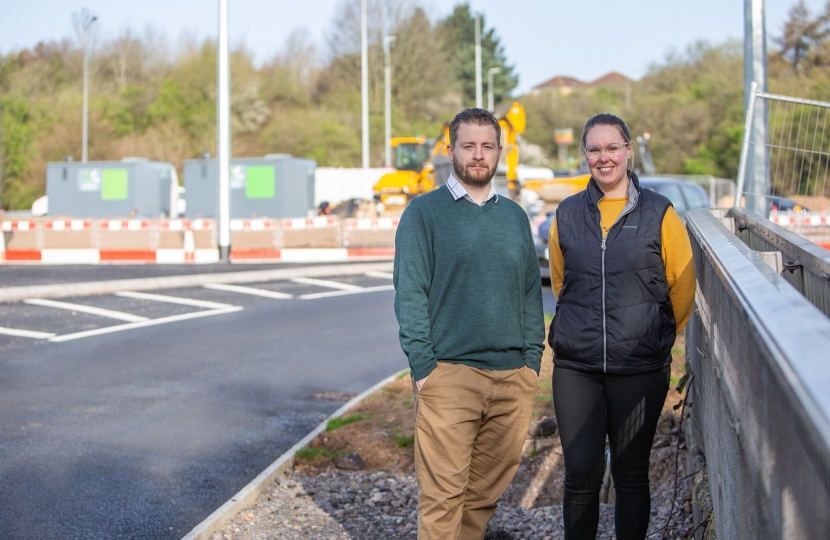 A Conservative-led campaign to reduce excessive noise from the Ring Road near Warmley has taken a big step forward, with the installation of acoustic fencing set to begin on Monday.

Installing a new fence near the Wraxall Road Roundabout to replace the old wall surrounding wall has been a long-running campaign for Parkwall and Warmley councillors Sam and Elizabeth Bromiley on behalf of nearby residents impacted by excessive noise from traffic.

Prior to the cancellation of the Full Council meeting in July, the two Councillors had intended to submit a petition to the Council, with around 100 signatures from local residents calling action to mitigate the problems near the junction. This was alongside their consistent lobbying efforts for measures to be put in place while the wider scheme of work at the roundabout was being completed.

Work on the 40metre-long, 2.5metre-high concrete sound absorptive barrier is set to begin on Monday during the final stages of the ongoing work to convert Wraxall Road Roundabout into a fully signal controlled “through-about”, with overnight closures lessening the impact on motorists. The Council is set to invest more than £500,000 on the resurfacing works, covering almost 10,000 square metres of carriageway,

Having welcomed the start of works, the two local Councillors said they are keen to see the barrier extended to the Kingsfield Roundabout and have pledged to continue their campaign for further investment.

Cllr Sam and Elizabeth Bromiley, who represent the Parkwall and Warmley Ward, said: “We are delighted that work is set to begin to install acoustic fencing along the Ring Road, protecting local homes from unwanted noise from the nearby traffic and we are pleased this will happen alongside the final stages of completing the through-about as to inconvenience motorists as little as possible.

“We have had numerous residents complain to us about the noise they have to live with day in day out, being so close to the Ring Road, and, even though we were unable to submit the petition as we had planned, we are pleased to have convinced the Council to listen to their concerns and do something about it. This, however, is only the first step and we are keen to see this extended further towards the Kingsfield Roundabout to have as big and as positive an impact as possible.”

Our Plan for Growth

Chancellor Kwasi Kwarteng on Our Plan for Growth in the economy