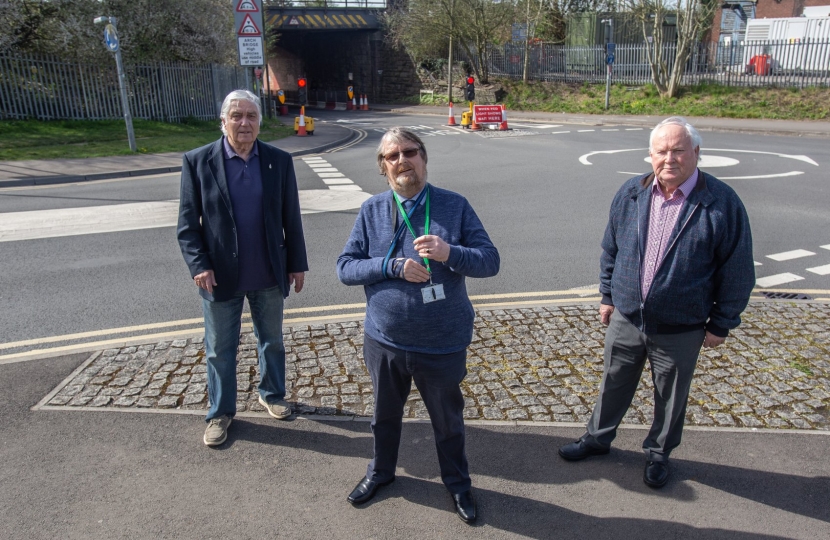 A campaign led by local Conservatives in Stoke Gifford to reopen two lanes of traffic under Parkway Bridge has been successful.

Measures to widen the footpath on either side under the bridge were put in place last year to allow for pedestrians and cyclists to socially distance from one another at the pinch point regularly used by commuters and students, with traffic reduced to one lane controlled by traffic lights.

With the nature of the measures being temporary, local Conservatives Cllrs Brian Allinson, Ernie Brown and Keith Cranney called on South Gloucestershire Council to remove the lights as soon as safe and possible to do so, pressing council officers to explore alternatives that could preserve the heightened safety levels of the new measures whilst relieving the pressure on the local road network resulting from the lights.

With traffic levels set to increase further in September as schools look to return, the trio demanded that changes be introduced by the end of the summer holidays and have been successful in securing a new scheme that will prioritise safety whilst allowing a more controlled free-flowing traffic.

Alongside the removal of the traffic lights and the barriers, South Gloucestershire Council will be widening the footways on both sides of the road whilst introducing a 20mph speed limit on Brierly Furlong and Hatchet Road from south of the mini-roundabout at the Church Road junction to the Ratcliffe Drive roundabout.

The works will be put into place overnight using road closures over a two-week period, with a start date to be released following agreement with Network Rail. Alongside this, the Council will be working alongside local schools to further promote road safety and to ensure local children that use the bridge underpass understand the changes.

This follows long-term plans headed by the local councillors to deliver a pedestrian tunnel through the embankment of the bridge. Their campaign was welcomed at the end of last year by the West of England Combined Authority, with funding allocated towards designing the scheme from a £2million strategic masterplanning fund and negotiations continuing with bridge owners Network Rail.

Celebrating the plans for the new scheme under the bridge, Cllrs Brian Allinson, Ernie Brown and Keith Cranney, who represent the Stoke Gifford Ward, said: “We are absolutely delighted that the Council has listened to our calls on behalf of the community to remove these lights and free up traffic with these positive measures, helping to keep Stoke Gifford moving as we look to move past the Covid-19 pandemic.

“Public safety remains a top priority for us as local councillors and we are pleased to see the footpaths being widened and the speed limit being changed to 20mph to encourage more considerate driving under and around the bridge.

“Our campaign continues for a new pedestrian tunnel through the bridge, removing the risks posed by traffic to the public on foot and bikes, and we will keep pushing the Council and the West of England Combined Authority to get this delivered as soon as possible.”