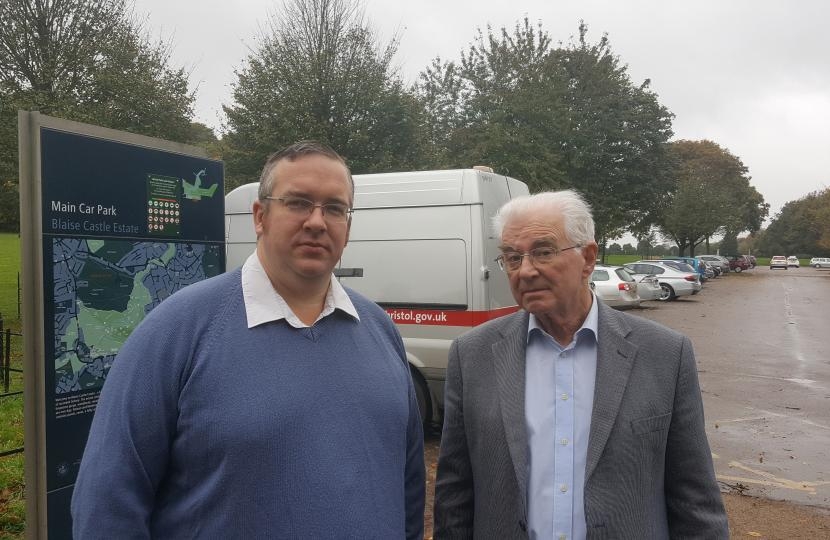 By now you will have heard of the Mayor’s plans to introduce parking charges at Blaise Castle. These are due start sometime in October and be set at £2 per day.

We believe that the introduction of charges at Blaise is a poorly thought through attack on the local community. It will raise little money and risks turning neighbouring roads into a de-facto car park.

These charges were first suggested last year as part of the 2017/18 budget. As your local Councillors we opposed them and tried to amend the Mayor’s budget so that he would be forced to spend less on things like public relations and the Council’s Brussels office and abandon plans for these parking charges. Sadly our proposals were voted down.

Since that vote we have played a delaying action insisting that if the Council is to press ahead then they need to put in place parking restrictions on some of the neighbouring roads to deter people from parking on junctions and across drives.

The Council is now consulting on these proposals. Their initial thoughts can be seen overleaf.

You have until 30th July to respond to these ideas on the details below:

Sadly this consultation isn't specifically on the rights or wrongs of introducing parking charges but rather on what parking restrictions you want incorporated into the final parking scheme. These may include additional locations in the areas where you think double yellow lines or junction protection would be beneficial. It could include any restrictions that you feel are not necessary or any existing arrangements that should be changed.

The Council have also said that if you feel that you need to have your driveway protected as a result of the proposed new regulation, then please make it clear in your response.

As we have said we believe that the introduction of charges is short-sighted, unnecessary and will lead to congestion problems in Henbury. We will do everything we can to get them scrapped, but in the meantime please use this opportunity to have your say on the Council’s proposals.